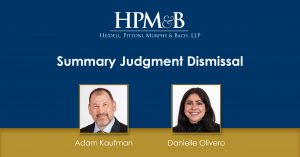 HPM&B successfully obtained summary judgment dismissal of all claims on behalf of a defendant Hospital in Supreme Court, Nassau County. Plaintiff alleged that the Hospital failed to implement appropriate decubitus ulcer prevention protocols and claimed that the decedent developed bedsores that were not timely and appropriately treated, which led to an amputated toe and death. HPM&B successfully argued that the toe wound was a vascular and diabetic ulcer that was unavoidable due to severe vascular disease and the decedent’s overall deteriorating health condition. The defendant hospital’s position was that it immediately recognized and treated the toe, but it ultimately could not be revascularized. Further, the Hospital established that the decedent presented with pre-existing skin breakdown and that the staff appropriately and timely implemented skin care protocols with close monitoring of the decedent’s skin integrity and nutrition. The court found that the wound care interventions carried out by the hospital staff all complied with the standard of care and did not cause or worsen the decedent’s skin breakdown and other claimed injuries.