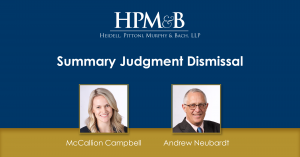 HPM&B recently obtained summary judgment dismissal of all claims against a defendant gastroenterologist and his private medical group in Supreme Court, Westchester County. Plaintiff claimed that the defendants improperly prescribing an addictive pain medication over a ten year period with inadequate monitoring, which contributed to the patient’s death. The defendants established through expert affidavits the distinction between addiction and medication dependence including how drug dependence is common in those patients with chronic pain such as the chronic arthritic pain suffered by the decedent. The court found that there was no evidence that the decedent had addictive behavior or toxicity from the medication and that the credible documentary evidence established the medical basis for maintaining the decedent on the medication. Further, there was no issue of fact regarding whether the pain medication was a substantial factor in causing the death. Accordingly, the court dismissed the case in its entirety.