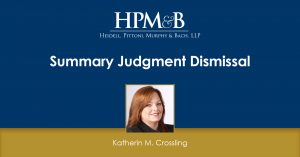 HPM&B recently obtained summary judgment dismissal of all claims in this Supreme Court, Bronx County case on behalf of an orthopedic surgeon, nurse practitioner and a major medical institution. Plaintiff presented to the emergency department with a hand fracture. He claimed that the defendants performed an improper reduction and splinting of the fracture and failed to offer surgical correction, which caused him to need surgery nine months later to correct an alleged misalignment. He also claimed permanent deformity and decreased range of motion.

Partner Katherin Crossling successfully argued that the care provided by defendants in the emergency department met the standard of care and that plaintiff was properly referred for close follow up with an orthopedist on an outpatient basis. A subsequent physician saw plaintiff soon after his discharge and formulated a treatment plan for the fracture. Plaintiff was offered surgery and declined. Furthermore, plaintiff sustained a new trauma months later that necessitated surgical intervention. It was argued that plaintiff’s claimed injuries had no causal connection to the treatment or alleged lack thereof provided by defendants.

Judge Joseph Capella agreed with the defendants’ position. He found that the opinions of plaintiff’s expert did not “establish a causal line to the treatment rendered by defendants” and insufficient to raise a triable issue of fact. The case was dismissed in its entirety.