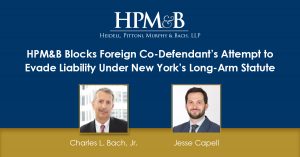 On behalf of a major medical institution, HPM&B’s Charles L. Bach, Jr. and Jesse Capell opposed a co-defendant healthcare organization’s motion to dismiss based on the lack of personal jurisdiction. The co-defendant, which had previously apologized for harming HPM&B’s client’s patient, argued that it did not have the requisite minimum contacts in New York State necessary to invoke New York’s long-arm jurisdiction statute. Justice Eileen Rakower, of the New York County Supreme Court, ruled in favor of HPM&B’s client, holding that the foreign organization had sufficient contact with the State of New York through a series of interrelated foreign transactions.