HPM&B successfully obtained a dismissal on behalf of a pediatrician affiliated with a major medical institution.  Plaintiffs, parents of an infant-patient, claimed that the pediatrician improperly reported them to child protective services because of a personal animus towards the parents.  Plaintiffs’ Complaint asserted causes of action for negligence, gross negligence, negligent infliction of emotional distress, breach of fiduciary duty, malicious prosecution,  and medical malpractice.  We moved to dismiss on the ground that plaintiffs’ claims were barred under Social Services Law § 419, which grants mandated reporters a qualified privilege for reports of suspected child abuse made in good faith.

On July 13, 2021, Justice Eileen Rakower of the New York County Supreme Court granted HPM&B’s motion to dismiss plaintiffs’ Complaint in its entirety.  The court agreed with our argument that plaintiffs’ own Complaint demonstrated that the physician acted in good faith, and that plaintiff’s claim that the physician acted with malice was speculative and insufficient to pierce the qualified privilege. HPM&B partner Jesse Capell represented the defendants. 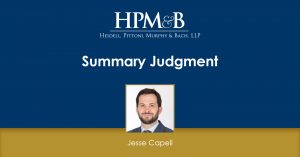